Nazira Goreya: we as Syriac Union Party are co-initiator and full partner in the democratic Autonomous Administration. I am the co-president of the Gozarto (Jazeera) region of the DAA. Our party holds seats in all political, legislative and representative bodies of the DAA.

Q: And in the Syrian Democratic Forces – SDF?

In a period of 4 weeks, the situation in the DAA changed dramatically. The US decided to withdraw its troops, Turkey invaded, and the Syrian army took central positions in the DAA regions.

Q: How did you feel seeing these incidents?

Nazira Goreya: We are disappointed and very critical of the decision by US President Trump to withdraw from northeastern Syria. Is the current situation the result the US wanted? We daily personally experience the consequences of the Turkish bombs and bullets over our heads. We had a military agreement with the US-led coalition to fight ISIS and its cruel inhumane ideology and we kept to this agreement. We fought ISIS and gave many martyrs. And ISIS and its dark mentality is not gone. It is still a present threat in Syria and Iraq. The US effectively left the fight against ISIS remnants and sleeper cells in NE Syria, and hence the protection of the population, to us. But now without the air and logistical support from the coalition against ISIS. This is very troubling. The US should have kept keep to its promises.

Q: So, you blame the US for the Turkish invasion?

No. Turkey is first to blame. But we had a military agreement with the US and, again, the US should keep to its promises. The withdrawal of the US gave Turkey the de facto green light to march into northeastern Syria although the DAA has neither been a danger to nor in any kind of serious encounter with Turkey. So, there is no justification at all for the Turkish military invasion. We were always very transparent in our relations with our neighbors. The Turkish army and its Islamist Syrian National Army, which in my opinion is nothing more than jihadi-influenced infantrymen used by Turkey to attack and occupy Tel Abyad and Rish ‘Ayno (Ras Al-Ain). Turkey trained them, financed them and provides them logistical and air support. This makes Turkey in the end responsible for all killings, looting and war crimes perpetrated by this radical group.

Q: But there is a ceasefire? The US brokered a ceasefire, maybe only after massive international media attention and protests, but still a ceasefire.

True but the ceasefire is not upheld at all by Turkey. At this very moment, its Islamists are attacking our Christian villages in the Khabour area around Tel Tamer (Christian villages, which were established by Syriac-Assyrians after the 1933 Simele massacre in Iraq). And Turkey continues providing them logistical and air support. So, what ceasefire? A ceasefire on paper…

Q: In your view, what are the short-term and long-term aims of Turkey’s operation?

Turkey wants to stop our ongoing democratization process in Syria as it is a threat to them. And they want to demographically change the area, by all means possible, to prevent the peoples of NE Syria to achieve self-determination and the real democracy they deserve.

Q: Why did the DAA turn to the Syrian regime and Russia.

The alternative was massacre and total destruction.

Q: The agreement between the DAA and Damascus is a military one. What does this agreement entail and what will happen with the armed wing, the SDF?

The agreement between the regime and DAA is for the Syrian army to be deployed at the border and to patrol the border and keep Turkey out. Our (local) military councils in the cities, towns and villages remain intact.

Q: Now that the US withdrew, what will happen to the Autonomous Administration?

The autonomous administration stands, continues and won’t change until there is a political agreement. We will keep working for the model of democracy we established through the DAA to be implemented as the model for the whole of Syria. It is a model we proved can work in Syria and it has successfully repelled radical Islam. Our goal is a democratic and pluralistic Syria. It is not separation and never has been separation. It is a commitment to a decentralized government with democratic, cultural and social rights for all people and peoples of Syria. This is what we want to see coming back in the new constitution.

Q: But you will have to work with the Syrian regime then?

We have always wanted the regime to come to the negotiation table. Our counterpart has always been the regime. We are part of a unified Syria and want its borders to be respected. Our demands were and are directed to the regime. But in our recent negotiations with the Syrian regime, the regime has requested the dismantlement of the DAA and everything to return to the pre-war era. This is not negotiating; this is not rapprochement. Have we fought so hard, come so far, suffered hardship and lost so many martyrs to simply hand everything back to the regime? We agree on an integrated and unified Syria, but the regime so far has made no advances towards free and fair elections, incorporation and inclusiveness, towards cultural and political rights for all peoples. If the regime is really serious about reconciliation it should come to the negotiation table and really put something on the table for the peoples of Syria.

Q: What do you hope comes out of the Geneva committee and the drafting of the new Syrian constitution?

The same as we demand from the Syrian regime in our negotiations. Why is the official name Syrian Arab Republic? This the Arab nationalism which we denounce. Where does it leave us, the Syriac people? Syriacs have been under the yoke of Arabization for far too long. Our call is for a Syrian-Syrian reconciliation process and Syrians together need to draft and choose the new constitution. Let’s put the DAA Social Contract and legislature next to the Syrian constitution and come to concrete solutions and to real reconciliation. The regime, the opposition and the DAA should all be included at the negotiation table without negative interference of other powers. Again, so far, the regime doesn’t want to give anything away. And I’m afraid the Geneva talks won’t bring us real change. Our view on Geneva is one of a mere stalling of time to give the regime the time to take back territory and control. Just as Astana and Sotsji were. If regional and international powers see Syria merely as a proxy stage to pursuit and reel in personal interests, nothing will change on the ground in Syria.

So, we don’t expect much from Geneva. Although UN-presided, the Geneva committee is based on previous Russian-Turkish-Iranian negotiations and agreements. There are 50 delegates from the Syrian regime, 50 from NGO’s, Syrian cultural and social organizations and 50 from the Syrian opposition. But it is way from inclusive, and our Autonomous Administration is, willingly and consciously, left out by the three supporting powers. This is not how the people of Syria should be represented. Why does only a small select group out of the 150 Geneva delegates really get to draft the new constitution? And why do the Syrian regime delegates have predominance there?

Q: How will all this affect the position of Syriacs in NE Syria?

Although the current situation may look worrisome at first sight, I believe the Syriacs are in the best position since the establishment of Syria as an independent country. We now really have something in our hands and something to gain. This is our best prospect to have our Syriac-Aramaic language officially recognized, to have our cultural and religious feasts incorporated and to have the Syriac people acknowledged as a people in the Syrian constitution and not merely be considered as Syrian Arab Christians. We are the salt of the Syrian earth. We will not let our Syriac people be extinguished from Syria. Syria is one of our ancient homelands.

Q You have been traveling Europe the last week. What is the goal of your visit?

We ask them to put pressure on Turkey to adhere to the ceasefire, a no-fly zone and withdraw from Syria. To first and immediately stop its attacks and keep its jihadi infantry from committing more war crimes. We appeal to European countries and the EU to take a role in peacemaking, peacekeeping and democratization in Syria. The EU can put pressure on NATO-member Turkey or sanction financially and stop the sale of weapons to Turkey. The EU can take on the role of peacekeeping force on the ground in NE Syria.

My colleagues Ilham Ahmed and Elizabeth Gawriye do the same in the US. Our DAA representative office, led by Bassam Ishak and Sinam Mohamad, supports them in their lobby there. 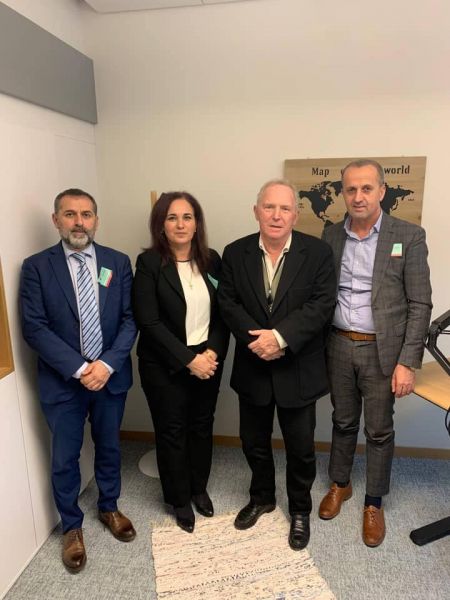 On International Day for Elimination of Violence against Women, Syriac Women’s Union official Ilham Matli calls for solidarity for women of North and East Syria in face of Turkish attacks

On International Day for Elimination of Violence against Women, Syriac Women’s Union official Ilham Matli calls for solidarity for women of North and East Syria in face of Turkish attacks

Member of Presidential Council of SDC US Mission Bassam Ishak: American officials informed us they did not green light Turkish attacks

HASAKAH, Syria — A Turkish airstrike that martyred two members of the Syrian Democratic …